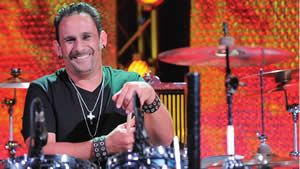 Randy Barach was born on October 26th 1972 in Burbank, California. He studied classical piano from 1980-1988 and was also an active vocalist studying under Mary Rago. In 1989 Randy discovered a passion for drums. He quickly began honing his craft and soon found himself working as both a live performer and a studio session drummer. Randy’s passion for drumming was fueled by his close work with Dave Tucker, his mentor with whom he remains close friends.

From 1989-1991 Randy toured internationally and later became a band director, specializing in choir tours. At the age of 16, Randy was awarded best combo musician at Universal Studios Hollywood for his musical direction, opening new doors to new and bigger venues.

Beginning in 1991, Randy worked with well-known musicians such as Cher, Don Henley, Stevie Nicks, Chicago, and Lenny Kravitz. During his time with these artists, Randy began to develop his own style and a newfound passion for not only playing the music but also creating it. He recorded his first album, Revelations, in 1997.

In 1998 Randy founded Spiritual Warfare Productions, and a new star was born. Randy’s goal with SWP was to create a one-stop shop for musicians and film artists. The company’s services include live sound engineering, recording film and audio productions, and eventually expanded to feature films, commercials, and television sitcoms. SWP’s involvement in film includes special effects makeup and encouraging individuals to express their art through today’s multimedia.

After the opening of SWP, Randy created his band Lennon Scott, which began recording in 2000. As a member of ASCAP, he has written and produced over sixty songs. Lennon Scott has four albums currently available from CD Baby and iTunes.

Randy has performed at many historical locations such as The Derby, The Baked Potato, The Viper Room, Whiskey A Go Go, The Rose Bowl, and Dodger Stadium. His vocals and drumming have been recorded and continue to be rotated in the entertainment industry on some of the biggest albums and tours in history. He has earned prestigious accolades and awards for his talents throughout his career, including platinum and gold album sales for projects he has worked on as both drummer and producer. He currently resides in Burbank, California, and is available for hire and consultation.