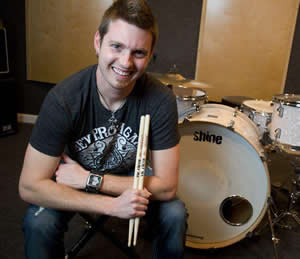 Kevin has been playing drums since the age of 11 and has over 12 years teaching experience. Although heavily rock-influenced by bands such as Nirvana and Foo Fighters, Kevin has a wide style range of many other genres of music.

Credentials include playing many venues to large audiences in bands such as Turning Point and Automatic Static, Nam Classic and has had songs featured on MTV's The Real World Road Rules Challenge and Jersey Shore. Also, Kevin has had the privilege of opening up for bands such as Filter, Far and Unwritten Law.

After Teaching at local music stores Kevin opened his own music school and recording studio One Eleven Studios in Roseville, CA where he holds down nearly 60 drum students and teaches online drum lessons at www.drummer101.com.