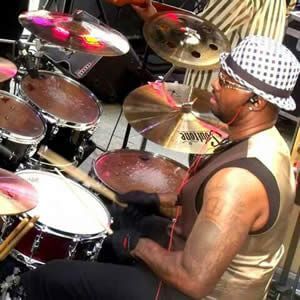 Charles “Stix” Taylor was born and raised in Chicago, IL and now resides in Las Vegas with his wife and son.

He knew at the tender age of four, as he watched his dad play the bass guitar for his own band, that he wanted to be involved in the entertainment sector.

“Stix” Taylor is the great nephew of “Queen of the Blues” multi Grammy award-winning singer, the late Koko Taylor. He played in her band after becoming a professional musician early in his career. His skills and talent as a drummer allowed him to perform at the annual Chicago Blues Fest, Chicago Bud Billiken Parade, Mississippi Blues Fest and other countless events and venues abroad.

“Stix” Taylor is a self-taught drummer and producer. His influences range from Blues, Jazz, R&B and Rock. He holds down the drum chair for Stellar nominated, award winning singer, Tarralyn Ramsey, who was the first contestant on “The Voice”.

In 2006, he invented the “Stic Mitt”, a highly specialized glove for drummers and percussionist. This glove is designed to prevent and help musicians reduce the risk of  Carpal Tunnel Syndrome.