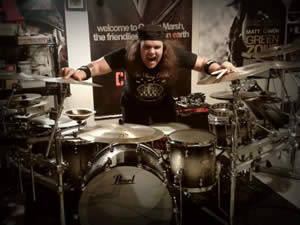 Chadwick “Chavi” is a Louisiana native born March, 1979. He started playing drums at the age of 3. Through the years he has worked himself into a professional drummer/percussionist. He blossomed his playing style in clubs, special events, and live stage performances touring around North America and South America.

Chavi has prospered through brain trauma after a former band jumped him. He was beaten up to the point that he was shipped to two different state hospitals. Through this process the doctors found that he had a brain tumor. Through the 9½ hour surgery and the grace of God he has reached beyond a standard goal of being an all around percussionist. He is continually stepping into the expert perspective of his professional career.

Chavi has been playing over the years to better himself as a percussionist by playing jazz, rock, country, heavy metal/ BLACK metal, and Christian music. This was not a given skill for him. It has taken years, practice, and a passion for playing the drums. This passion has turned him into the professional drummer he is today. It has taken him beyond just being a performer to a teacher, mentor, and even a leader. His passion is now his mission. To help people obtain a relationship with the God that has helped him through all his struggles through recovery to now.

He is the drummer/percussionist for the band The Shiny Darks. It is a punk, heavy beat driven band with Q and Chavi as the driving force for the band. The Shiny Darks bring together two different styles and meshes their potential to new heights. It is their mission to put out great music and use their talents to help ministries and other positive organizations they feel called to be part of now and in the future.